Go with the flow. Or make your own flow.

Entering his final semester as an Emory undergrad, David Wu’s future as a doctor was all-but a given. He had the grades, he’d scored well on his MCATs, and was in the Essay phase of applying to med schools when he met Andy Butler. And everything changed.

“Andy and I were in the same business-school classes on Healthcare Operations — which was a focus of my studies,” Wu remembers. “We were tasked with developing a healthcare-related mobile app concept — then building a business plan to support it.”

Not only did Butler & Wu win the class competition (which was judged by several local venture capitalists), two of the judges approached them afterward — offering to help raise money for the idea.

So what was the idea?

“We’d proposed a ‘dating-style’ app that would match interested volunteers with drug manufacturers seeking patients for clinical trials,” Wu explains. “The average cost to bring a drug to market is more than two billion dollars over ten years, and the cost goes-up every day it’s still in development. Our projections indicated that the app could attract 10 to 20 extra patients in a 2-year period, cutting the typical patient-recruitment phase of a drug’s development by a week or two. Which, when you do the math, would literally save drug companies millions of dollars.”

Based on his classroom success, Wu (in 2010) launched a business, and the app — which he called TrialMatch. Three years later, he gave-up on the venture.

Here was the most frustrating part of that experience: “We’d made connections within the administrations and/or review boards of several Research Universities who participate in product development. We’d been told, by multiple University lawyers, that there was absolutely no reason the idea wouldn’t work. We’d built the code to meet all the existing data security standards for EMRs (Electronic Medical Records).

“But nobody was willing to be the first not to stick with the traditional recruiting process” — wherein prospective patients respond to recruitment ads, then fill-out consent forms on paper. At the same time, the Universities had little financial incentive to speed-up the process, since they’re sponsored by pre-allocated grants generally not tied to recruitment numbers and time.”

What an amazing coincidence . .
As a footnote, Wu continues, “Our idea has recently re-surfaced. There’s a new app on the market that essentially does the same thing TrialMatch did.” What’s particularly interesting about this new app is, two of the co-sponsors are Duke and Emory — which were among the Universities that had quote-unquote “rejected” the TrialMatch idea. Either Wu has an Oscar-caliber poker face, or he really has taken this recent discovery in stride — given his brief “live and learn” chuckle over the matter.

They’re much better company than lawyers.
These days, Wu spends most of his time working with robots. (NOTE: Your author, the son of an attorney, is entirely to blame for sub-head above — which really was written in jest).

A breakthrough discovery
Wu’s current venture, Motus Nova, originated with the pioneering research in stroke rehabilitation led by Emory Professor Steven Wolf. Prior to Wolf’s work, the prevailing protocol for rehabilitating stroke survivors who’d lost functional use of their dominant limbs was to train them to use their unaffected limbs instead.

An industry-wide misdiagnosis
All of which leads to the primary problem for stroke survivors: Adequate insurance coverage. Or more accurately, the lack thereof. “Insurance policies offer stroke survivors the same amount of coverage for rehabilitation afforded to patients with common orthopedic injuries. The problem is, stroke-related rehabilitation requires magnitudes of the time and effort it takes to rehab orthopedic injuries — because, of course, it primarily involves re-organization of neural networks.

“Think of it this way: World-class athletes and musicians spend thousands of hours training to reach the top of their fields. A lot of people are born with comparable physical gifts, but what separates the best from the rest is how they use those gifts. In short, it’s their neural wiring and training. The same goes for stroke rehabilitation. It’s a process that typically takes years. But again, insurance only covers a couple of months — and very few stroke survivors have the means to pay out of pocket for the care they need to recover.”

Necessity, meet invention
Which ultimately inspired two University of Arizona professors to develop the devices known as the Hand Mentor and the Foot Mentor (rehabilitation robots specifically designed for, respectively, upper limb rehabilitation and foot & ankle rehabilitation). “The beauty of the robots’ designs is in their simplicity. They’re made for highly specialized functions — which enables us to produce them at a fraction of the cost of, for instance, complex robots used in production-line manufacturing.”

Moreover, at $12,000 per unit for the Pro versions — which are sold to clinics and hospitals — they’re a fraction of the average salary for a licensed physical therapist. So why wasn’t Motus Nova wildly successful from the outset? In part because taking new products to market requires a vastly different skill-set than it takes to design them.

And then there’s that insurance problem again. “Both products have been proven to be extraordinarily effective, but clinics and hospitals can’t bill insurance companies anything for the time they’re in use — unless their usage includes hands-on therapist time.” Which, of course, defeats one of their primary purposes (effective rehabilitation without requiring a therapist). That hasn’t stopped dozens of clinics & hospitals from buying the units — which they use as much for the positive PR (demonstrating their commitment to the latest technologies) as they do for patient therapy. 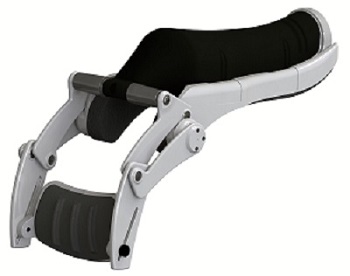 At the same time, Wu and his partners are currently developing home-use versions of Hand Mentor and Foot Mentor, which they’ll sell directly to end-users. Devices offering the same functionality as the Pro versions at a significantly lower price point, and available on financing plans for $350 a month (less than the cost of 2 hours of hands-on physical therapy in some markets).

OK, it works great, but – – –
Given the extraordinary time-investment required of stroke survivors in rehabilitation — typically in the range of 20 hours a week, for years — an obvious question arises: How do you keep people motivated to stick with it? “Great question. And in fact, it’s a central part of our product design. The devices are connected to screens that enable users to play simple but engaging video games while they’re rehabilitating.

“At the same time, our software gives patients constant feedback on the progress they’re making. Which can be tremendously motivating. When you think about Fitbits, for instance, they don’t make it any easier to get out there and walk or run. They just give people reports on what they’ve done — and that can make all the difference.

“Our software takes user feedback a step further: It can send progress data to patients’ clinicians — who can then serve as partners in keeping them motivated, making it more of a team effort.” Speaking of which, the value of that data has not escaped the attention of Wu’s team. “Clinicians typically see patients only one or two hours a week — which, of course, is a fraction of the time required for stroke rehabilitation.

“The data we collect can ultimately be used to create far more sophisticated predictive modeling — which could not only improve rehabilitation regimens from a physical standpoint, but also in terms of timing and pacing. With that kind of data power, for instance, Mr. Smith’s unit could tell him exactly when to maximize therapy effort to get the best results — while Mrs. Jones’ unit might recommend a less intensive regimen, given the years of work she has ahead of her, and the likelihood that an intense regimen would simply burn her out.”

Market potential
“We’ve been approached by some large investors who understand the scope of our market. In the US alone, roughly five million people suffer from chronic stroke-movement deficit. 800,000 Americans have strokes every year. It’s the number three killer in the country behind heart disease and cancer. The Veterans Administration has also shown significant interest in our products at the national level. They even produced a video about our devices, and there’s been talk about placing units in VA hospitals across the country.”

So why aren’t the insurance companies doing more? “They’ve calculated the lowest possible ‘socially acceptable’ cost of coverage, and that’s all they’re going to pay until there’s enough pressure for them to pay more.” Which is one reason Motus Nova is introducing versions that end users can afford. “The more patients we can serve, the more attention we get for our products — and the more likely we are to create a groundswell of support for change.”

Which goes back to why Wu decided on a career in business, instead of medicine, in the first place. “I’ve always wanted to do something that helps people in need. When I think about the opportunity we have before us, the positive impact I can have on people’s lives is beyond anything I ever could have done as a clinical physician.”